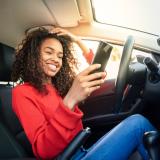 Nolan Davis and his mom attended Black Lives Matter marches to support the movement and to add their voices to the cause.

NURYS CASTILLO: People have been organizing Black Lives Matter protests around the country. And my special guest today, Nolan Davis, is one of them. Thing is, he's only 8 years old.

He is from Kirkwood, Missouri, and decided that he wanted to start his own Black Lives Matter protest for young kids with the help of his mom. All right, you ready?

NURYS CASTILLO: What inspired you to create a kid's march for Black Lives Matter?

NOLAN DAVIS: We made a flyer. And then we sent it on the internet. And then everyone said they would be coming. And this turned out to be 700 people.

NURYS CASTILLO: What? That's a lot of people.

NOLAN DAVIS: I wanted to have this March because Black Lives Matter is important to me. I'm worried about Black people like me getting hurt.

KRISTIN DAVIS: He kind of alluded to this, but we've been to a couple other local marches. And at one of them, they gave everyone the opportunity to speak at the end to the crowd. And he turned to me and asked if he could.

So he went up there and spoke. And I think he got energized by the reaction of the crowd. And so he immediately walked back over and said, can I have my own march with the kids? So it wasn't something that we approached him about. He was really adamant that he wanted it to be an opportunity for kids to share their voice.

NOLAN DAVIS: Kids can make a change of the world. It's so important to everyone.

NURYS CASTILLO: Why do you think it's so important for kids like you to speak out about Black Lives Matter?

NURYS CASTILLO: So I heard you have some cool things coming up. Do you want to share some?

NOLAN DAVIS: I'm going to go to a march tomorrow. And then I'll speak there. And everything would change.

It's important to speak my voice so people can hear me and know they can share their voices, just like me.

NURYS CASTILLO: Do you think the world would change if they keep doing these marches?

NURYS CASTILLO: How has the feedback been since Nolan has started organizing the protests?

KRISTIN DAVIS: You know, he said there was like 700 people there. And we thought there might be 50. So initial crowds were amazing.

We're both eager for everyone to hear his message and see that kids can make a change. And like I said, for adults to see that if kids can do it, then it's time for us to speak up, too. You just hope that by doing something like this, that it changes a few hearts and a few minds.

This is a problem that's been going on for thousands of years. It's not going to get fixed right now. So I think we can build on that and hopefully go forward from here.