With Labor Day around the corner, there's plenty to look forward to this fall. We're inching closer to sweater weather, which means that there are plenty of weekend TV show binges, after-midnight spooky films, and oh-so-many movie nights in our future. The best sidekick for all that viewing, is, of course, a great platform to make all that viewing easily accessible and all-around better. Enter: The Apple TV 4K. 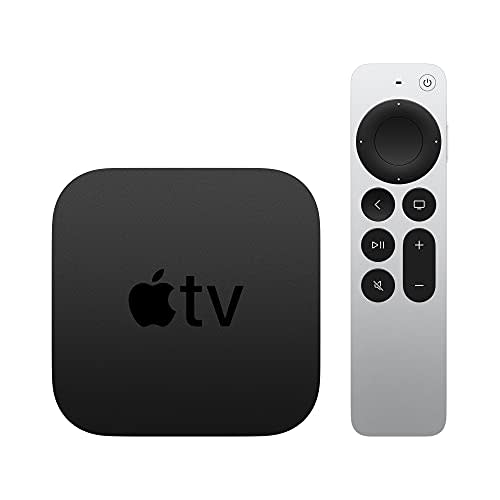 It has something for everyone, from technophobes to connoisseurs. For starters, if you're already a fan of all things Apple, you'll love the sleek menus, easy-to-navigate interface, and that all-around seamless feel the brand is known for. It boasts access to Apple Arcade, Fitness+ and Music, private listening for two sets of AirPods, plus photo and video sharing via AirPlay. Plus: The remote got a swanky new upgrade, with a touch-enabled clickpad and access to Siri.

But that's the basics. If you explore under the hood, you'll discover an A12 Bionic chip which lends a massive boost to both sound and screen, High Frame Rate HDR which displays 60 frames per second, and Dolby Vision, which makes what you're watching even more vivid. It's all fluid and crisp, making everything from the news to sports to your new video game appear and sound like it's all happening right in front of you.

Nearly 11,000 Amazon shoppers rave about it. One shared that it gave an old TV new life:

"I purchased a used older TV that couldn't access apps like Netflix and Prime — with the Apple TV, all I had to do was plug it in to an HDMI port on this TV, and turn it on," they revealed. "Setup was incredibly easy — just sat my iPhone down next to the Apple TV box, and it downloaded all of my settings and I was ready to go! Now I can access all of my TV/video subscriptions across all services. Highly recommended!"

Another added: "Absolutely LOVE this. I replaced my Amazon Fire Stick with this Apple TV — it's everything I wanted and then some. Easy to use and not sure why I waited so long to buy one!"

Cord cutters are loving it, too. One noted: "Leaving the cable company behind and switching to Apple TV has been great. Also, I use YouTube TV, which is fantastic. Anybody on the fence about getting an Apple TV, do it — you won't be sorry."

If you have Amazon Prime, you’ll get free shipping, of course. Not yet a member? No problem. You can sign up for your free 30-day trial here. (And by the way, those without Prime still get free shipping on orders of $25 or more.)

The reviews quoted above reflect the most recent versions at the time of publication.

Looking for more great Amazon tech deals? Check these out: