Close this content
We may earn commission from links on this page, but we only recommend products we believe in. Pricing and availability are subject to change.
Rick Broida
August 10, 2022, 2:55 PM·9 min read

You've heard the old expression, "It's a dirty job, but somebody has to do it." If the job in question is vacuuming the house or mopping the floor, then guess what: Nobody has to do it! Not if you put a robot to work on those floor chores.

More good news: Robot vacuums have improved considerably in recent years, offering more suction, smarter navigation and even mopping features. Some can even empty their own dustbins. (Granted, it's a short step between that and a complete robot uprising, but I'm willing to risk it if it means I can stay on the couch longer.)

But how do you choose a robo-sucker that's right for your abode? These things range in price from around $200 all the way to a jaw-dropping $1,400. Will a cheap one get the job done? Are the fancier features worth the extra money? Having tested a number of these things over the years and several newer models more recently, I've got answers for you.

First things first: If you tried a robot vacuum 10 years ago and came away disappointed, I don't blame you. Early iterations were, well, super-dumb, able to navigate floors only by bumping into anything and everything. Getting caught on cords and curtains was the norm. They lacked any smart-home connectivity to speak of, and they barely had enough power to suck up a Cheerio.

Newer models rely on LiDAR-powered guidance systems and app-based mapping. They can respond to Alexa and Google voice commands ("Alexa, tell the robot to mop the kitchen floor!"). And they're much smarter, in some cases able to detect extra-dirty areas and focus more attention on them.

What remains, then, is to decide which features matter most and how much you're willing to spend. Even at the lower end of the price spectrum, you'll find surprisingly capable vacuums — all of them far more cooperative than the surly teenager you can't get to pick up a shirt, let alone clean the rug.

Here are my picks for the best robot vacuums of 2022, starting with the most affordable. 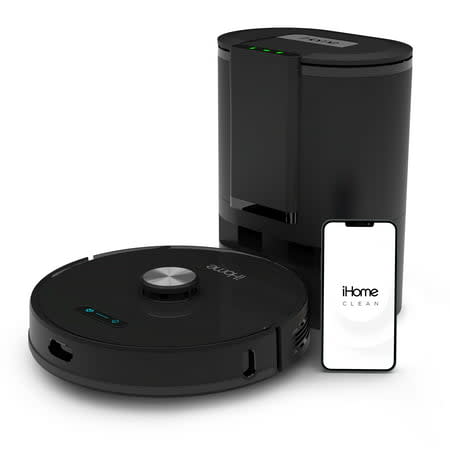 You'll be hard-pressed to find a better deal on a smart, self-emptying robot vacuum. It can mop, too, though user reviews indicate that's not its strong suit.

On paper, the iHome AutoVac Nova sounds almost too good to be true. With features rivaling models costing hundreds more, it definitely comes across as the bargain to beat.

For starters, unlike many sub-$300 vacs, it's legitimately "smart," able to pair with iHome's app for mapping, zone setup, scheduling and the like. It can also connect with Alexa and Google Assistant devices for voice-powered activation.

For navigation, the AutoVac Nova employs sophisticated LiDAR instead of the "bump-and-go" tech traditionally found in cheaper models. And with 2,700Pa of suction power, it should be more than up to the task of cleaning carpets and hard floors alike.

But the bigger surprise here is the self-empty base, where the vac empties its dustbin automatically upon docking. That's a feature typically found in models costing at least $100 more. Equally surprising: The AutoVac Nova can mop as well.

Again, all that sounds great on on paper; how is it on floors? By most accounts, it's a solid vacuum and a so-so mop. At Amazon and Walmart alike, user reviews are decidedly mixed, averaging 4.1 and 3.8 stars, respectively. Most of the dings are related to less-than-stellar mopping results.

But even if you take mopping out of the equation, $299 for a smart, self-emptying robot vacuum is hard to beat. 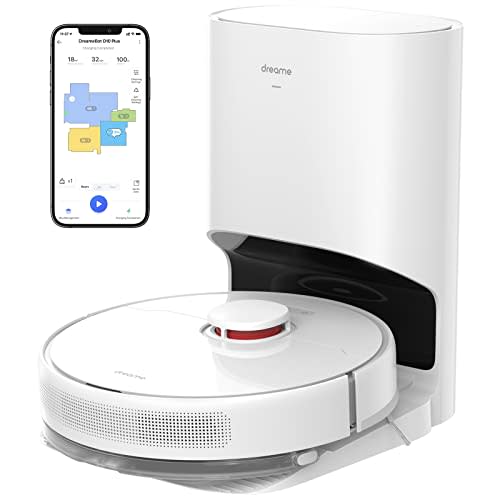 D10 Plus Robot Vacuum and Mop with Self-Emptying Base

Except for a flaky setup process, the D10 Plus vacuums, mops and self-empties with great efficiency. It's one of the more powerful robo-suckers, too.

Dreametech's D10 Plus ticks just about every important box, offering one of the highest suction ratings (4,000Pa) of any vac I've tried along with a self-emptying bin and optional mopping capabilities. (It's also one of surprisingly few models available in white.) It normally sells for $500, but you can often find a Lightning sale or coupon to bring the price down to $400. And at that price, I'd have to rank this as one of the best robot-vac values on the market.

I tested this at my sister's home, where she has a large main-floor level that's mostly hardwood, but with a rug here and there. One minor gripe I have: Dreametech's app-setup process takes far longer than it should. First you have to create an account, which actually requires verification via a phone number. Then you have to select your vac from a lengthy list of products, many of which look very similar — and the app is formatted in such a way that some of the names are actually cut off. Finally, there's the need to connect the D10 Plus to your Wi-Fi network, another multi-step procedure. None of this is terribly complicated; it just felt like a lot of steps, some of them unnecessarily confusing.

The good news is that once everything was configured, the D10 Plus worked like a champ. Dubbed "Rosie" (in honor of the Jetsons) by my sister, she completed the entire floor without needing to recharge and without ever needing a rescue. My often-barefooted brother-in-law noticed a "significant improvement" to the floor's overall cleanliness. Their final verdict: "A++ winner!" 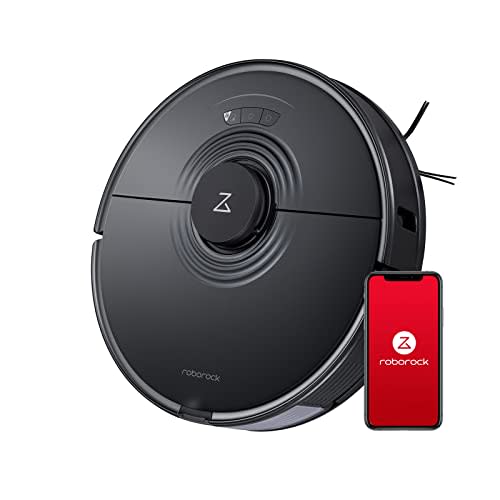 One of the first vacuums with an auto-retracting mop pad, the Roborock S7 has been cleaning my floor effectively for over a year. Prices fluctuate, so be sure to wait for a sale.

Whether you live in a house or an apartment, chances are good you've got hard floors in the kitchen area and carpet elsewhere. Thus you might be interested in a robot vacuum that can also mop. Just one problem: Most models can't handle both tasks in one, er, sweep. If you want it to mop, you have to install the cleaning pad. If you want it to vacuum, you have to remove the pad so the carpet doesn't get wet. It's a whole thing.

Enter the Roborock S7, which intelligently detects whether it's on carpet or hard floor and raises or lowers the mop pad accordingly. And when it's done mopping, the pad similarly retracts so it doesn't drag dirt around on its way back to the dock. Smart!

Granted, the S7 doesn't match the suction power of the Dreametech D10 Plus, nor does it have self-emptying capabilities. This despite selling at a higher price (though watch for sales; it sometimes dips as low as $500). I'm including it here because it's the vac I've used on my floors for over a year, and it's been admirably reliable and effective. 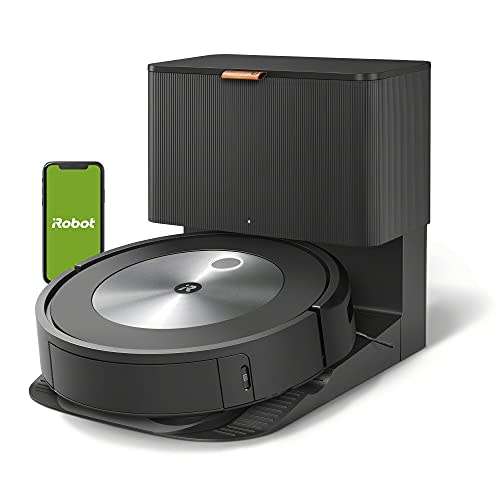 Got pets? Consider this extra-smart Roomba, which can navigate its way around unexpected pet messes (to say nothing of cords and curtains).

If the Roomba name rings a bell, it's because this brand has been around longer than just about any other. Perhaps it's unsurprising, then, that the Roomba J7+ is one of the more advanced models on the market, able to detect and avoid not only objects like cords and socks, but also pet waste.

Let's pause a moment to consider the gross implications of the latter: A robovac that can't do this has the potential to roll over an accident and then smear it across your floor or rug — to say nothing of gunk up the vacuum, possibly beyond repair. (Hey, I said it was gross!)

iRobot is so confident in the Roomba's camera- and AI-powered navigation capabilities, in fact, that it backs it with a Pet Owner Official Promise (or "POOP," LOL): The company will replace the vac if it fails to, er, bypass the poop. (For the record, the Roborock S7 MaxV Ultra can detect pet waste as well, but it costs nearly twice as much and doesn't come with any kind of guarantee.)

The front-mounted camera that gives the J7+ its pet smarts also affords robust obstacle-avoidance. Out of the box, it already knows to avoid things like cords and curtains, but as it navigates your home, it'll snap photos of objects and later ask you to review them. Anything that's a permanent obstacle, you can mark as such, and you can also designate Keep-Out Zones for areas it should avoid altogether.

Although the J7+ doesn't mop, it does automatically empty its dustbin into an allergen-proof bag located in the charging dock. And it employs two rubber-brush rollers underneath instead of just one, the idea being to better agitate — and then suck up — floor debris. According to iRobot, only Roombas have that second roller.

So just how much does this, er, suck? iRobot doesn't provide a suction rating; a company rep says such numbers can be misleading because there's currently no standardized suction testing for robot vacuums. 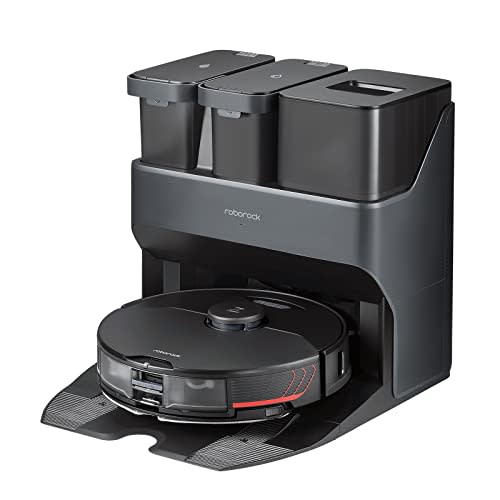 If money is no object (or your home is just really, really dirty), splurge on Roborock's super-versatile cleaner. It not only vacuums and mops, but also self-empties its dustbin and water reservoir.

If there's such a thing as the Rolls Royce of robot vacuums, the S7 MaxV Ultra is it. But with that superlative-heavy nomenclature comes a correspondingly high price: Roborock's machine sells for a hefty $1,400, far above most other models.

However, where a Rolls Royce is still just a car, the S7 MaxV Ultra is more than a traditional robovac that can empty its own dustbin; it's also a mop that can empty its own water tank. I watched a lot of The Jetsons when I was a kid, and I never once saw Rosie the Robot do that. Meanwhile, it has camera-powered obstacle avoidance (like the Roomba J7+) and a virtually unparalleled 5,100Pa suction rating.

Just be warned: In addition to a big budget, you're going to need a big space to accommodate the dock. It's huge, standing about 16 inches high and extending a good 20 inches from the wall. Granted, there's a lot going on in this thing: In addition to garage-style parking for the vac itself, the dock houses a clean-water tank, dirty-water tank and dustbin. Just as remarkable, the dock can actually wash the mop pad as well, meaning one less chore for you to do compared with other mop-capable vacs.

Available only in black, the MaxV Ultra really does combine all the best elements of other vacs. It's powerful, versatile and rarely needs your involvement. Even if you run it daily, you won't need to empty or refill its water tanks for about a week.