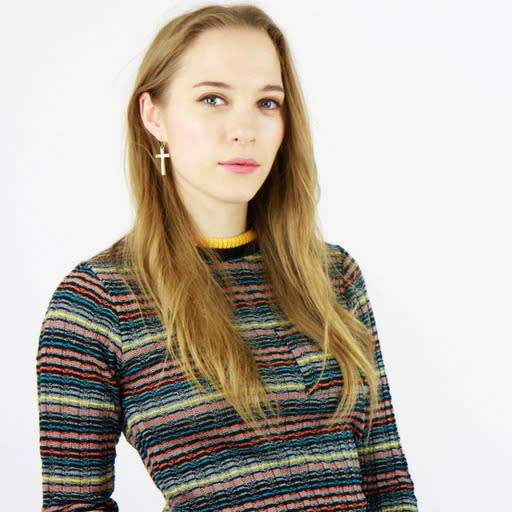 The star looked like she was off to the office in a grey workwear frock. [Photo: Jonathan Hordle/REX Shutterstock]

The singer and X Factor judge has kept a low profile whilst going through divorce proceedings with her second husband Jean-Bernard.

However, Cheryl seemed in high spirits as she was accompanied by a mystery male on the FROW. The handsome bearded gentleman kept a protective hand on Chezza as they were seen having a bit of a giggle.

Also on the FROW was model Natasha Poly who looked ravishing in a red jumpsuit with matching choker necklace.

Cheryl was looking as stunning as ever in a very smart and sophisticated tight grey pencil dress, that showed off her tiny frame. Chezza proved once again why she is a style icon as she dressed ahead of the trend. The exact grey check dress was seen moments later making its debut in Gareth Pugh’s AW16 catwalk show.

The dress Chezza was wearing on the FROW also took a walk on the catwalk. [Photo by Eamonn M. McCormack/Getty Images]

However, what stole the show was the use of Hannibal Lecter masks.

Pugh has described that his new collection explores what he describes as “the visual codes of raw female ambition”.  Whilst we are not sure the masks and really ready to wear, they sure do make a fierce statement.

More of Pugh’s fashionista friends were seen at his after show party with L’Oreal Paris.

Gal pal Lara Stone put on a leggy display in a detailed black dress. The model and mum-of-one wore her long blonde locks loose and accessorised with a simple black clutch.

Children Are The Hottest New Accessory At London Fashion Week