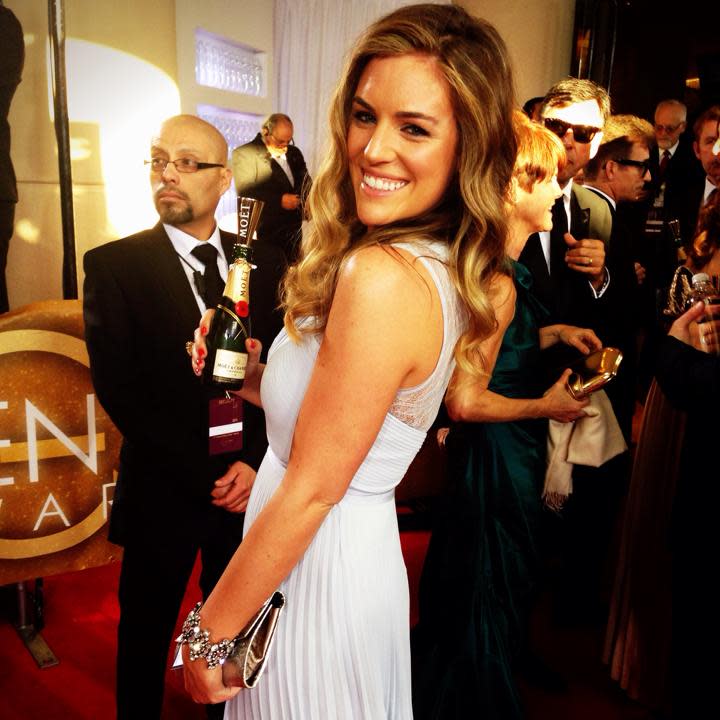 While all eyes are on the nominees — Brad! Charlize! Renée! Laura Dern! — some of the best Oscar moments happen when the cameras aren’t rolling. Here are a few things you didn’t see on TV.

When Regina King read Brad Pitt’s name as the winner for Best Supporting Actor, the crowd absolutely erupted inside the Dolby Theatre.

Everyone was ready for Pitt to earn his first acting Oscar.

“It’s about time!” one audience member yelled out.

Pitt, the acceptance speech connoisseur this awards season, began his clean sweep on a political note. While he won the coveted statue for Best Supporting Actor, the Once Upon a Time in Hollywood star referenced President Trump’s impeachment trial.

“They told me I only have 45 seconds up here, which is 45 seconds more than the Senate gave John Bolton this week,” he told the A-list audience. “I’m thinking maybe Quentin does a movie about it, in the end, the adults do the right thing.”

The room had a mostly positive reaction to Pitt’s reference to the former national security adviser. There were lots of laughs, huge applause and the inevitable “oohs.” But there were also a few groans as a couple of people visibly squirmed in their seats.

Overall, it landed. However, the crowd seemed to be more into his sweet shout-out to his kids. Pitt received cheers when he thanked his children whom he shares with Angelina Jolie — Maddox, 18; Pax, 16; Zahara, 15; Shiloh, 13; Knox, 11 and Vivienne Jolie-Pitt, 11 — “who color everything I do.”

Backstage, Pitt elaborated on his political statements, saying he “was really disappointed this week” with the results of the Senate impeachment trial, which resulted in President Trump’s acquittal.

“I think when gamesmanship trumps doing the right thing, it's a sad day and I don't think we should let it slide,” he said. “And I'm very serious about that.”

Parasite gets the crowd on its feet

It was a big night for Parasite. The crowd reaction to Bong Joon Ho winning Best Original Screenplay was loud — there were actual screams. The audience was back roaring when the South Korean movie won Best International Feature Film and for a final time when it became the first foreign-language film in Oscars history to win Best Picture.

Parasite had the momentum all night... people are freaking out, standing ovation of course #Oscar2020 pic.twitter.com/HkPUb44XLW

The Keanussance is alive and well

Fun fact: Floor 1 of the Dolby Theatre is where all the stars gather. It’s heavily guarded and unless you’re a nominee, plus one, handler or “working press,” good luck getting through.

That said, celebrities are still flocked to one area that connects the red carpet to the theater. As Natalie Portman entered, women came up and thanked her for her red carpet fashion statement. She was gracious and talked with everyone.

Salma Hayek, Scarlett Johansson, Adam Driver, Will Ferrell, Spike Lee and basically every celebrity you saw walk the red carpet rushed to their seats through this same area but also had to engage in small talk and selfies. However, the belle of the ball, so to speak, was Keanu Reeves. Yes, the Keanussance is still very much on.

Reeves, who presented with Diane Keaton, brought his mother as his guest — not Alexandra Grant as reported on social media — and he never left her side. When approached by Yahoo Entertainment he said it was “very special” to have her as his date tonight. He accompanied her to the bathroom and waited outside, taking selfies with anyone who asked — and there were a lot of asks. However, once his mom came out, he grabbed her hand, escorted her back and politely declined to talk to fans or journalists as he wanted to enjoy the night with his mother.

Leonardo DiCaprio doesn’t typically take his girlfriends to the Oscars. (Never forget Gisele, though.) Usually, it’s his mother who goes as the actor’s plus one. But this year, the Once Upon a Time in Hollywood leading man brought Camila Morrone and they sat front and center — literally. The couple was seated in prime seats in the first row, middle of the theater. Morrone sat in between her boyfriend, who she wrapped her arm around, and his co-star Brad Pitt.

The model and actress seemed right at home. She easily mingled with the A-list stars, chatting with Pitt and sharing sweet moments with DiCaprio. While they weren’t overtly all about the PDA, it’s clear she is more than a girlfriend of the moment.

As guests arrived at the Dolby Theatre on Sunday night, there were vocal supporters of President Donald Trump waving signs and giving Hollywood the preverbal middle finger.

Vehicles had to roll their windows down for security checks before the red carpet and it seems there was one actor who irked those holding “Trump 2020” and “Women for Trump” signs: Robert De Niro. He was specifically called out by the president’s dedicated supporters (rain and all), which isn’t a surprise given The Irishman star’s comments about the current administration. It’s not known if they ever got the attention of De Niro.

Oscars here we go..... this is what it looks like as you make your way to the carpet. I hope Robert De Niro doesn’t have his window open when he rolls up, this woman is not his biggest fan #Oscar2020 pic.twitter.com/dk4hxGoZpp

Joaquin Phoenix and Renée Zellweger once again dazzle... and puzzle

When both the Joker actor and Judy star won, as expected, nobody in the theater was disappointed. The applause was enthusiastic and their peers seemed genuinely happy. However, their acceptance speeches had more people silent than on their feet.

Phoenix, in keeping with his awards season tradition, used his time to discuss racism, gender inequality and environmental issues — all topics genuinely championed in the room. But when he brought up how “we feel entitled to artificially inseminate a cow” he lost a lot of people. As one person said, his heart was in the right place, but the delivery was “a bit graphic.”

When he switched gears and talked about cancel culture and his own shortcomings, he quickly had the crowd captivated again. Leonardo DiCaprio and Brad Pitt seemed to enjoy the whole thing, though — they were among the first people on their feet as Phoenix concluded his remarks.

As for Zellweger, while she seemed long-winded at times, the audience was united in celebrating her win. It was just a bit quiet as she delivered her acceptance speech.