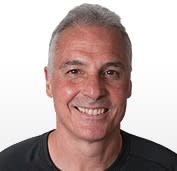 NEW YORK — There is an air of unreality about the Dec. 7 heavyweight title rematch between Andy Ruiz Jr. and Anthony Joshua.

It is being fought in Saudi Arabia, a country with no boxing to speak of — Zuhayr al-Qahtani, a London-based lightweight, is its one and only registered professional boxer — in an arena that has yet to be built.

It will be presented by a streaming service, DAZN, whose subscription numbers are shrouded in mystery, and because of the eight-hour time difference, will begin at a time (4 p.m. ET) when no heavyweight title bout has begun since the pre-TV days of Jack Dempsey.

And three months after their first bout at Madison Square Garden, it is still somewhat hard to believe that the rotund Ruiz actually dropped the chiseled Joshua four times and knocked him out in an upset perhaps rivaled in heavyweight history only by Buster Douglas knocking out Mike Tyson.

But perhaps the hardest thing to believe about this bout is Joshua himself.

Is he the fighter who survived a knockdown to stop Wladimir Klitschko in 11 brutal rounds to win his title? Or the reluctant warrior who looked more relieved than crestfallen when losing it to Ruiz?

Clearly, he’s capable of being both. And honestly, no one can predict which one he will be the next time he and Ruiz step into the ring.

The first time around, the burden of proof was on Ruiz to prove he even belonged in the same ring with Joshua.

This time, the burden is on Joshua to prove that he still belongs in the same sport as Ruiz.

That is because there is something about Joshua that says although he very much looks the part of a heavyweight champion, the feeling goes no further than skin deep.

You sensed it in the buildup to the first fight, when he came to New York with an entourage, a personalized clothing line and a smooth line of pre-fight patter. Something seemed a little too polished about Anthony Joshua, which might be expected from a guy who had already earned an estimated $50 million without having yet beaten a truly dangerous fighter in his prime. No, 41-year-old Klitschko doesn’t count.

And then on fight night, when Joshua — who had professed to want to “make a statement’’ in his MSG, and U.S. debut — came out inexplicably flat against Ruiz, a late substitute with nothing in his résumé to suggest he was capable of what he was about to do, the feeling only got stronger that this guy might be all hat and no cattle.

By the time the fight ended, with Joshua leaning against the ropes in a neutral corner, a little smirk playing around his lips and his posture giving referee Michael Griffin no indication that he had any stomach to continue the fight, it seemed clear that the suit of musculature he wore into the ring was merely a cloak. As a fighter, he seemed hollow inside.

Can you imagine Muhammad Ali or Joe Frazier or Mike Tyson or Larry Holmes or even Deontay Wilder, Joshua’s amateurish but indisputably fiery counterpart, giving up the title on his feet with a smile on his face?

On Thursday, Joshua and Ruiz came to New York for a news conference to begin the hype for the rematch. The two had appeared at a news conference in Riyadh barely 24 hours earlier and had virtually just stepped off the plane after a 15-hour flight.

And yet, Joshua seemed as fresh — and plasticized — as he had on his arrival in New York for the first fight back in June.

Asked to explain, finally and definitively, how a prohibitive favorite built like Dwayne “The Rock” Johnson could have been manhandled so completely by boxing’s equivalent of Fat Joe, Joshua lapsed into a stream of platitudinous vagaries.

He spoke of being “more boxing focused.’’ He referred without giving specifics to “lifestyle stuff I need to fix up.’’ He called Ruiz’ right hand “a punch from the gods,’’ as if a god would ever be caught dead delivering the kind of artless, clubbing blow Ruiz beat him with.

Pressed to specify what he will do differently in a rematch, Joshua said, “I don’t want to overcomplicate the situation. I’m going to simplify it and do what I have to do. For 22 times my blueprint worked. The 23rd time I had a little glitch in the matrix. When you go to war, you need more tools in your box than one thing or two things. I’m sharpening the tools I left out of the box.’’

And he added the classic maxim of first-time losers throughout history: “Now I understand a lot more of what it takes to come back.’’

But when Joshua found out Ruiz would not be easy — and that moment came when Ruiz climbed off the deck after eating a perfect left hook in the third round — Joshua was unable to dig down and find the fighting heart that had gotten so many of his predecessors through much tougher fights against far more formidable opponents.

While Joshua was able to get off the floor to beat the diminished Klitschko, that was a different sort of fight, one in which his opponent fought robotically and allowed Joshua to fight at a pace that was comfortable for him.

Ruiz, on the other hand, fought at a pace that Joshua either could not or would not match, despite their disparity in physical conditioning. And unlike Joshua, whenever Ruiz was stung, he came back harder.

No amount of conditioning can instill that in a fighter. It has to come from within. And so far, Joshua has not proven that he has that kind of fire inside him.

“The killer instinct hasn’t left yet,’’ he said.

But the question is, was it ever there to begin with?

Twenty-three fights into his professional career, we still don’t know exactly who Anthony Joshua is.