More than 1 million Americans have died from COVID-19

As the U.S. and Europe place sanctions on Iran for the nuclear program suspected of having a military aim, Iran continues to insist its work is for peaceful purposes only. That claim will likely suffer a setback by an interview published Tuesday in the semi-official Fars News Agency. The wife of slain nuclear scientist Mostafa Ahmadi Roshan tells Fars her husband wholeheartedly sought Israel’s destruction. Roshan, a chemistry expert and a director of the Natanz uranium enrichment facility, was killed during morning rush hour in Tehran in January after a magnetic bomb was attached to his car. No one has claimed responsibility for killing the nuclear scientist, but Iran has blamed the CIA, MI6 and Mossad for a string of assassinations targeting its nuclear scientists. Here’s an excerpt of Fars’ report: 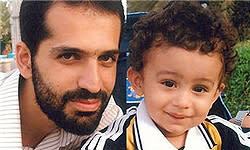 Wife of Assassinated Scientist: Annihilation of Israel "Mostafa's Ultimate Goal" TEHRAN (FNA)- The wife of Martyr Mostafa Ahmadi Roshan Behdast, who was assassinated by Mossad agents in Tehran in January, reiterated on Tuesday that her husband sought the annihilation of the Zionist regime wholeheartedly. "Mostafa's ultimate goal was the annihilation of Israel," Fatemeh Bolouri Kashani told FNA on Tuesday. Bolouri Kashani also underlined that her spouse loved any resistance figure in his life who was willing to fight the Zionist regime and supported the rights of the oppressed Palestinian nation.

This is not the first time Iranian officials have been quoted calling for Israel’s destruction. President Mahmoud Ahmadinejad has said that Israel “must be erased from the page of time” and that the solution to the Middle East conflict is the “elimination” of Israel. The combination of these calls for annihilation along with the prospects of the Islamic Republic being one day armed with a doomsday weapon is at the core of the debate over whether Israel should attempt a military attack to thwart Iran’s nuclear progress. h/t: IMRA

Our goal is to create a safe and engaging place for users to connect over interests and passions. In order to improve our community experience, we are temporarily suspending article commenting